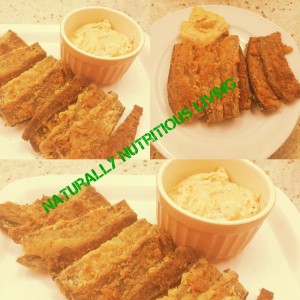 Brinjal, dipped in a batter and deep fried is a common feature in many an Indian household.  Traditionally made with a combination of chickpea flour with spice seasonings, mixed with water to form a batter, then deep fried in processed oil, this delicacy in brinjal featured prominently over festivities and functions.  To this day, as recent as this past weekend, Head Chef bought some at a local fair for the upcoming Diwali (Festival of lights) celebrations.

I’m so into adapting the foods I grew up with so preparing this was actually pretty easy.  The bonus in this recipe is that the coconut flour gives off the nuttiest of flavours and complements the grilled brinjal fabulously, as does the quick fry in coconut oil. That it passed the taste test by my fussy-eater and seasoned-cook Mum, who sealed this brinjal recipe with her stamp of approval by asking for seconds and thirds, made me beam with pride.

Have as a snack serving or  a side dish to you main meal, this is another amazing adaption of an age-old recipe that flows through the kitchens of my family and that of many others too!

1/2 to one cup coconut flour

1/2 tsp bicarbonate of soda (may be omitted)

Himalayan salt and seasoning to taste

Optional:  cayenne or chilli,  chilli flakes,coriander and cumin powder or roasted and crushed cumin seeds, to season the coconut flour 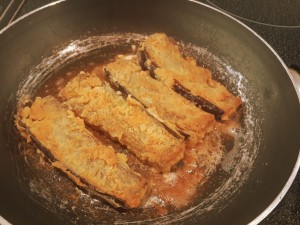 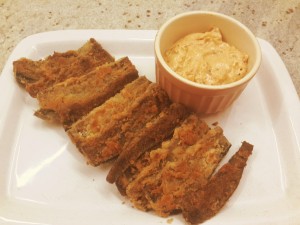 Fried Brinjal as a snack with a Paleo chilli-mayo dip 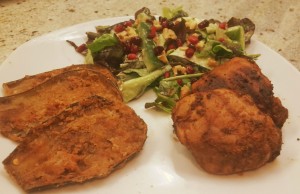 Fried Brinjal as a side veggie in a meal