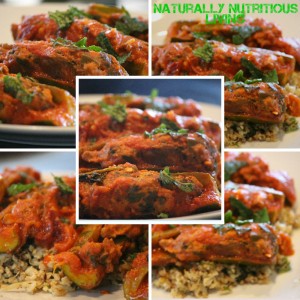 Stuffed Marrows in a tomato gravy on spiced cauliflower rice

This recipe for stuffed low carb marrows appeared in the Sunday Times, Extra in the Recipe of the week column by South African doyenne Chef  Asha Maharaj.  The omission of sugar which is not required at all in this recipe, as well as the change from sunflower or canola oil,  renders it a Paleo option that may be as spicy as you like it, and takes the boring out of  marrows!

I have made similar “marrow boat”recipe in the past without the tomato puree, which serves as a snack option too.  Canned tuna and Paleo mayonnaise stuffed into the marrow, lightly oiled with coconut oil and baked or grilled, worked very well.

In trying out this recipe and as you will note from the pictures, I added all the veggies and masala to the mince, to create something different in the stuffing…it worked well with the plain onion and tomato gravy.  The green peppers and mushrooms added to the gravy as per this recipe, is a delicious combination.  The spices may be altered to suit your preference.

The simple ingredients  of this recipe below, produce a delectably different tangy and spicy taste and texture to this dish. 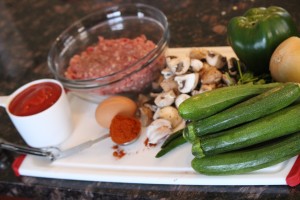 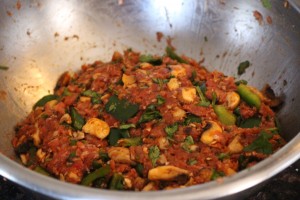 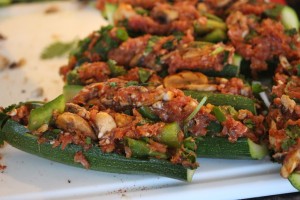 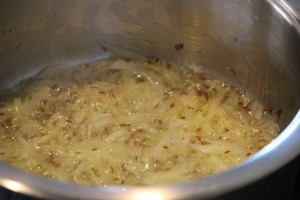 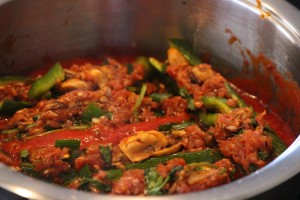 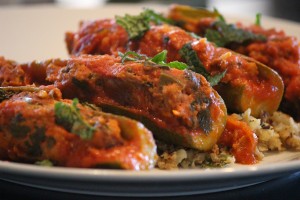