I love all foods hot and spicy and in zhoosing up my meals I think creatively to enhance a boring supper and blending flavours to create a dish that is appealing in both looks and taste.  I was browsing through my mum’s recipe books in KZN last week and came across a vindaloo recipe that was handed to her by a friend that I never had the privilege of meeting. The friend was of Goan  origin and worked as a cook to many in Durban. On a trip to Goa  (West India) a few years ago, I had the pleasure of tasting vindaloo, in both fish and chicken and nothing eaten thereafter compared to it.  I have adapted the recipe to make it  Paleo Detox friendly and the pungency of the cloves and red crushed chilli work well to create a good vindaloo, without wine or white wine vinegar, as was in the original recipe.  I also added baby marrow / courgette / zuchinni (instead of potatoes) to bulk up the meal and include a fair measure of vegetable carbohydrates.

The Vindaloo itself, originated in the Indian region of Goa and it is derived from a Portuguese dish known as “Vinha De Alhos” which translates as “wine and garlic”.  The Portuguese dish was effectively a wine and garlic based stew which was typically made with Pork and served around Christmas time.  However, after the dish was introduced to India, it changed rapidly to what we now know as the Vindaloo with the introduction of chillies and different Goan spices.
A Chicken Vindaloo isn’t generally that popular in India, other than in Goa, but the dish has become very popular in the UK, the Middle East, the US and Canada and also Australia and New Zealand, where it is pretty much universally included on Indian restaurant and take away menus.

It also seems to taste much nicer if eaten a day or two after preparation as this allows more time for the flavours to be absorbed by the meat and although some of the flavours and spices can be used in different quantities to vary the dish according to taste, one thing to remember is not to reduce or change the amount of vinegar as a Vindaloo get its excellent flavour only as a result of the vinegar in the recipe. For my purposes, I used cloves and dry red chillies as a flavour enhancer.

Typically the Goans use pork with a traditional Vindaloo, but it can be prepared with beef, chicken, seafood and also vegetables such as potatoes, peas and other root vegetables.  Here I’ve decided to use chicken.  Generally a paste of the spices which includes sugar is made, along with a base of oil, garlic and onion.  I have adapted the recipe according my purposes. 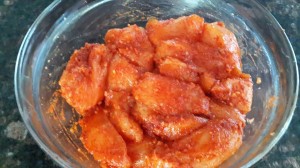 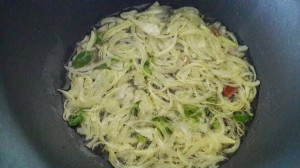 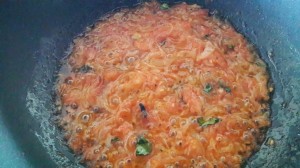 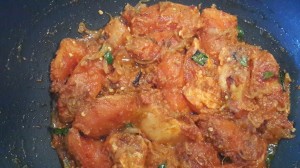 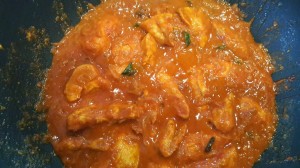 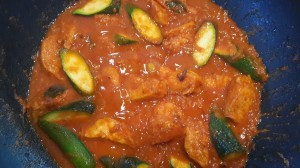 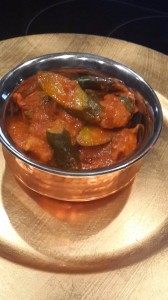