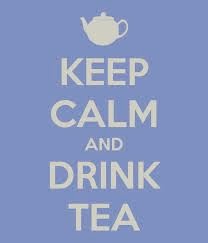 The above pic is a motto I live by!  Those that know me well, know that I always carry 2-3 varieties of green and herbal teas in my handbag for “emergencies”!  While tea bags do the trick, nothing beats the aroma and taste of freshly steeped tea leaves, brewed lovingly to exact time standards to produce the perfect cuppa!

I just have to be a tea snob?  Justified by the separate large shelf in my pantry cupboard dedicated to my growing tea collection!  What about the long trek from W43 Street to E 78 Street in New York 2 years ago to find the Lebanese tea seller who allowed my travel companion and I to sample and mix the bestest tea combinations ever.  Felt like a tea expert for a good hour or so!  This delightful “excursion”, saw us mixing leaves from chilli, fushia, peach, rosehip, lemon, chocolate, cumin, pomegranate and so much more – never have I felt so excited about Tea!

Like a collector of fridge magnets, or little knick knacks from every international destination visited, I collect teas!  From airports to a tea house in Darjeeling, India, sampling some of the finest and premium teas in the world, to the sampling I keep in my handbag to rescue me in times of need, I love my tea – more than most, my reviving Green tea.

The one tea that I haven’t been able to “wrap my head around” is the spicy Masala Chai that the ever so eager and wanting seller of Indian garments will force upon any interested shopper, at ‘no cost’.  The sickly sweetness, mixed with the aromatic spiciness of an Assam tea infusion which is the combining of one half cup of water with one half cup of milk in a pot over heat. Sugar may be added at this point or after. Ginger is then grated into the mixture followed by adding a “tea masala”. Although the ingredients may vary from region to region, “tea masala” typically consists of cardamom powder, cinnamon powder, ground cloves, ginger powder, and pepper powder. The mixture is brought to a boil and 1 teaspoon of loose black tea is added. The chai is immediately taken off the heat, covered, and allowed to sit for approximately 10 minutes to allow the black tea to infuse into the chai. The chai is then strained and served.

A subsequent trip to India, when accepting the Masala Chai from a vendor, saw me asking for the omission of sugar (secretly hoping that they wouldn’t meet my request) and when I did drink it, I must admit, I felt refreshed….but my sister makes a better version of Masala tea, with her own subtle yet spicy mix of the tea masala, hands down!

While I have an impressive collection, I have yet to fully appreciate and explore the world of organic teas – next on my list of to do’s.  I want to explore what goes into making it, as much as I want to refine my ability to choose the “right” tea and be able to distinguish the brand and type just by a tea taste!

Today I happened to be in Dischem on a totally unrelated matter and was drawn to the section selling teas, spending a good few minutes wanting to increase my collection.  I left with 2 different brands of green tea and box of Organic Pukka Cleanse tea, which is said to purify the skin.  Having a cuppa now, the blend of organic nettle, fennel and peppermint has managed to revive me and put a twinkle in my eye…indeed, I am as passionate about teas as much as I am about fiery hot green chilli and baked brinjal!!!

So all said and done, I think I may be a Tea Snob in the making?  If not one already….you decide!
(This being my second blog entry on Tea in one week! LoL)

Got this off the www and it says it all, so well. Edited for the SA Context!

Why Become a Tea Snob?

In my opinion, being a tea snob is not about thinking you’re better than someone else just because you happen to know more about a particular subject.
It is simply being passionate about something. It is being able to appreciate and identify quality. It is taking time out of this fast paced, stressful life, to stop and smell the roses (I mean tea)!
Fine teas are a luxury that anyone can afford. Besides, it is the second most consumed beverage (behind water) in the entire world.
So go ahead, become a snob. The world could use a bit more passion in it. If youre the typical South African who has yet to venture beyond the Tannie’s Rooibos Tea, now’s your chance to branch out,  expand your horizons! You might just find out you love this stuff!
Sit back, and relax as I help you discover the joys of great tea.